After graduating from Galvanize’s coding bootcamp, Luis Rocha went on to land a front-end developer job at San Diego-based digital marketing and web development firm The Control Group. We spoke with Luis to get his insights about how his time at Galvanize impacted where he is now. 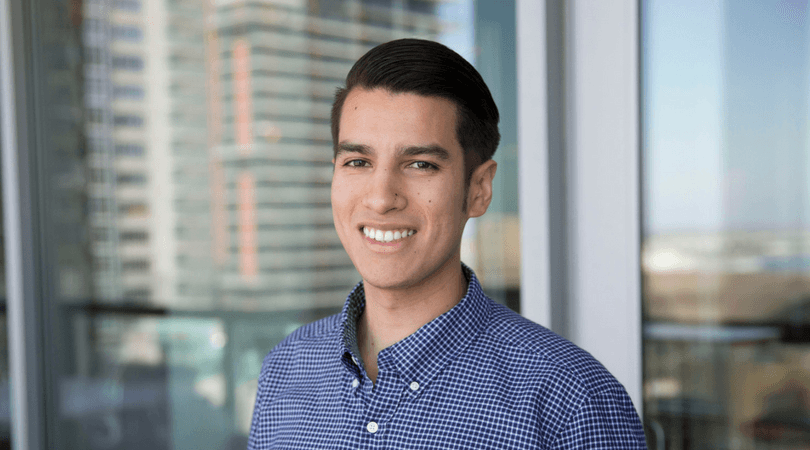 Were you in San Diego before attending the program at Galvanize, or did you live somewhere else?

I actually grew up in San Diego, but moved to San Francisco, and lived there for six years. In those six years, I went to school at Galvanize and worked. Then when it came time for the second job hunt, it actually brought me back to my hometown, which has been really cool and interesting to see as an adult versus high school, middle school, etcetera.

What was your first job after Galvanize, up in San Francisco?

I was doing front-end development at a global b2b SaaS company called Interact Intranet — they were actually based in the UK, so that was a fun experience.

What were you doing before you went to to Galvanize, and what made you start thinking about joining the program?

Before I went to Galvanize I was in college, and on the side I was working as a photographer and designer [Check out some of his work here!]. I was having a lot of fun doing that — I worked primarily for music festivals and concerts, met a lot of interesting people, and I made a friend named James.

One day he picked me up to go see some other friends, in a BMW … and I was like “hey if you don’t mind me asking, what do you do?” and he said “oh, I dropped out of high school and taught myself how to code.”

I’ve always been really good with computers and had an interest in technology and an innate instinct with it, but I didn’t know how to get started learning stuff like that. So he gave me a bunch of links to some free resources, and it really grew from there … I discovered the concept of coding bootcamps — luckily I was in San Francisco, which is really the hub for it, and it went from there … I self-taught for probably about six months before Galvanize, if not eight.

Would you recommend that to someone, to get in the game a little bit before going to a bootcamp?

Oh yeah, one hundred percent. I would say that if you’ve never coded, there’s no excuse not to test the water first with the litany of free resources that are out there, and at that point you can see how you feel about it and if you like it or not. I knew that it was something worth pursuing when I was declining going out with friends weekend after weekend because I wanted to stay home and do some Codecademy stuff. 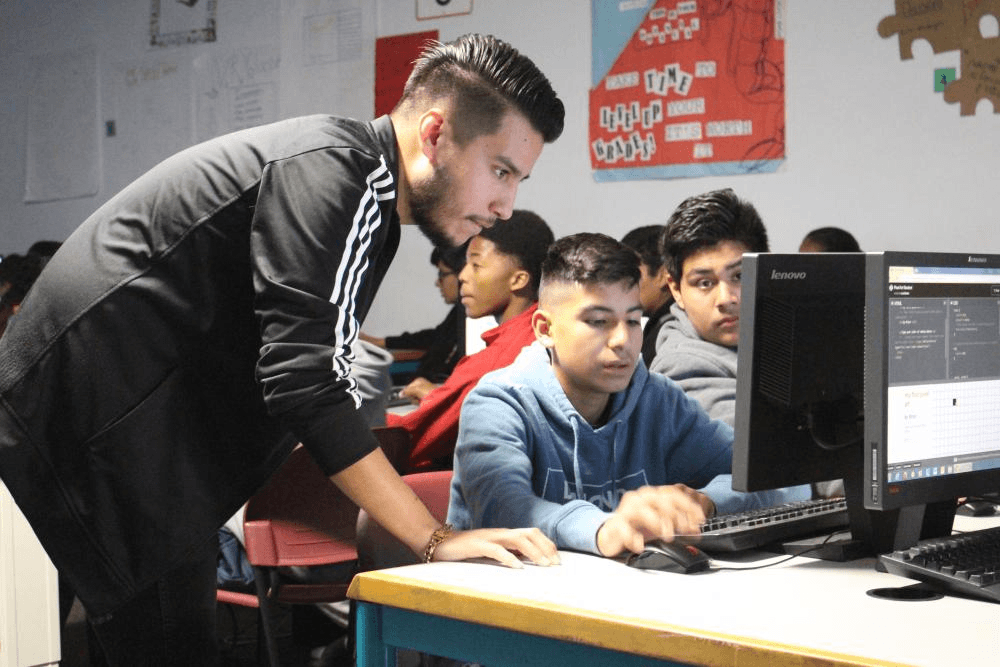 Luis Rocha at an Hour of Code event, where he taught local high school freshmen the basics of code and the tech industry.

What were some of the most valuable skills or lessons that you learned from your program?

Number one, I was one of the youngest people in my program — I was 22 when I entered the program — so primarily it was learning how to “adult” beyond the 9-5 schedule: stay healthy, wake up on time, go to sleep when you need to, not go out when there was something on a Thursday night. That was really one of the foundational skills that it taught me, as well as being self-sufficient.

I found myself really being drawn to the front-end of code, especially with my background in photography and design. So I would veer off during the downtime and learn some more fundamental concepts about web design, user experience, user testing, stuff like that. I found that learning with the group and taking what I liked about it and going deeper with it was probably one of the best decisions.

Since you applied to jobs in San Francisco, where tech is a huge, booming industry but also super competitive, do you think that lent to a competitive job search landscape?

Yes, absolutely. And I will shout out recruiting at Galvanize for getting me the reference to the job I ended up taking at Interact. Obviously you enter a program hoping that their placement services are gonna be up to par, and Michelle, who was the Career Services Manager at the time, really took her time to ask what my interests were and refer me to places that were aligned to my interests and my personality. When you’re able to find that, then you’re that much more likely to get the job.

Can you give some examples of the projects you're currently working on?

It’s actually a lot of fun: so you’ll have a website, and let’s say the goal of that website is to get somebody to give their email for an ebook. We’ll have a default page, and then you iterate on that design. You’ll make a hypothesis, let’s say I think that if we make the button red instead of green, we’ll get more conversions. Then you code [a page incorporating the change] and start the test … I actually got my first default changed two days ago, so [my code is] now in production officially.

That’s just something again that I really love because it’s development, it’s design, it’s marketing, it’s a little bit of psychology, and it just really lets me stretch every single part of my brain that I possibly can. Something that my favorite instructor, Liz, told me was to really look for a job where I can bring my whole self, and I definitely feel like I get to do that at my current job.

To circle back to when you were applying to Galvanize — Do you think that you would have been able to attend if you hadn't gotten financing from Climb?

No, it would have probably been a huge deterrent if I wasn’t able to get the financing from Climb … and Climb does a really good job of informing you and being very transparent. The documentation is extremely easy to read, the online Portal is simple to use, and it gives me a good idea of where I’m at, how much I owe, what the payment is going to be, so it’s probably one of the easiest payments to keep track of out of anything else I have on my plate.

If you could go back and give yourself any advice when applying to Galvanize, what would that be?

It would be not to wait for perfection because it’s never going to be the perfect time, it’s never going to be the perfect resume. I feel like there’s a lot of time that I lost waiting to make things perfect or waiting for the timing to be perfect, whether it was applying to a job, applying to a bootcamp, pursuing some personal projects, and that’s been a pretty big theme throughout my time ever since I took an interest in code. Just don’t wait for perfection — ready is better than perfect.

Is there anything else that you want to share?

A closing statement is: once I made the decision to do a bootcamp is when I really felt a transition from going through the motions — you know, you’re supposed to do high school, you’re supposed to go to college, you’re supposed to follow this set path — and I feel like that’s really when I took control of what I wanted to do. And more importantly, reflected on what I wanted. Ever since then, I’ve gotten started on my career, I moved, I became self-sufficient, I got engaged. Once you make that decision and realize what’s motivating you, it’s only going to be amazing from there. Every year has been better than the last, so it’s been a good time. I wouldn’t be able to finance it without you guys!

“Just don’t wait for perfection — ready is better than perfect.” 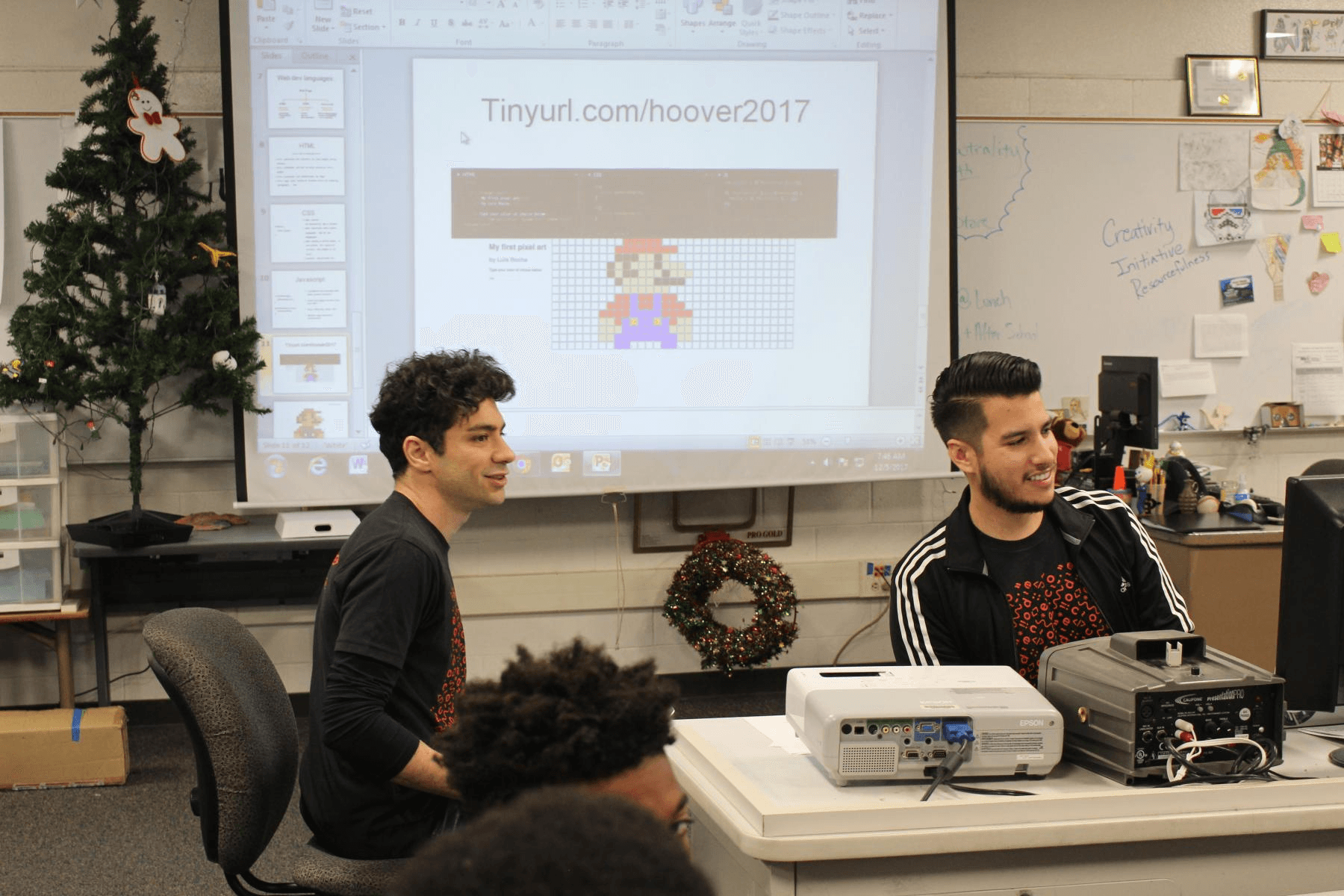 Luis Rocha at an Hour of Code event, where he taught freshman at a local high school the basics of code and the tech industry.

Find and compare programs near you

Luis is a client of Climb’s. However, he was not paid or otherwise compensated for this testimonial. This testimonial reflects the real-life experiences and opinions of Luis; however, it should not be assumed that all users will have the same experiences. Individual results may vary.

PrevPreviousHow to Negotiate Your Salary
NextIndustry Spotlight: Entering the Field of Data ScienceNext